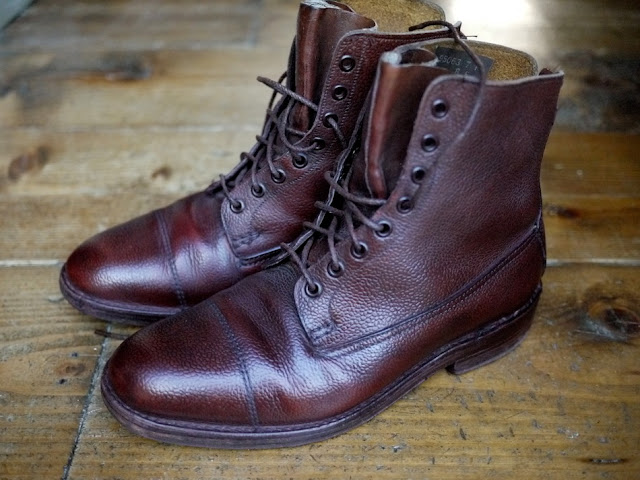 I've been noticing boots like these - which I'd once call officers' boots - for years, but it is only fairly recently that I've managed to find out exactly what they are, and snaffle a pair for myself.
The short definition is that these are a Lotus Veldtschoen Derby boot; Lotus are the makers, at one time one of the UK's leading shoe manufacturers, and Veldtschoen was one of their key construction. Levi's used to boast "a new pair free if they rip".  Lotus, in much the same non-nonsense vein, were always "guaranteed waterproof."

Popular initially for use in golfing, hiking and hunting, Lotus Veldtschoen were first marketed as officers' boots around 1915, and remained in production until, approximately, the 1980s. They still promote coos and sighs of recognition from old-school shoe salesmen, who often cite the pair in the windows of Cordings (the wonderful tweedy huntingear shop, now apparently owned by Eric Clapton). This particular pair sat in a bucket of water, for many years, with the "guaranteed waterproof" banner above them.

With the aid of Rebecca Shawcross, Shoe Resources Officer at Northampton Museum, I've found out more of the history of these boots. Veldtschoen was a construction always linked with Lotus,  who claimed to have their own distinct variation, shown below, but in fact it's an ancient configuration, dating back to the 15th and 16th century. It was also known as American Stitch Down, and first appears on the documentation trail as Veldtschoen in the mid 19th century, according to Rebecca: "There were British patents taken out for that type of construction in 1843, 1856 and 1860. We believe the term Veldtschoen comes out of the Boer war; Africaans were wearing shoes with hide turned out, and one chap who worked here thinks it's possible that type of construction was taken to South Africa by the Dutch."

Vledtschoen boots didn't arrive as mainstream footwear until World War 1. It appears that one manufacturer, Manfield, had Veldtschoen items in their catalogue by around 1890 but without a doubt the best-known brand for Veldtschoen was Lotus, produced by the company Bostock and Son . The Bostocks were one of the oldest-established footwear families in the Midlands; there are records of the indentures of William Bostock who was apprenticed to Matthew Morell, in 1759; Thomas, his son, was in turn apprenticed to William, and eventually moved to the town of Stafford in 1814, where he worked with his own son and established the business, Bostock and Son. This was the site of the family's factory, shown circa 1930. The company was renamed Lotus Ltd in 1919. 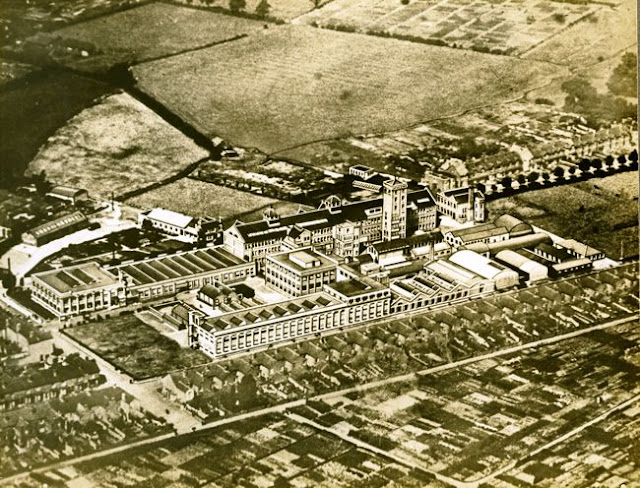 Lotus produced a wide range of footwear - their Delta brand was a popular make of women's shoes - but Lotus Veldtschoen would become their flagship line. They were probably launched around 1912, but they were being heavily advertised by 1915, and were aimed at officers' families - the idea being that their son would withstand the rigours of the trenches better in a pair of waterproof boots. The initial model seems to have been a Derby Boot (shown bottom right in the illustration below) with an apron front and stitching down the toe, a shape most of us know from the Alden Indie boot. Before (and after) marketing them as officers' boots, Lotus also advertised them as suitable for golf, and hunting.

The distinctive aspect of Veldtschoen is, of course, the construction. It is indeed reckoned to be more waterproof than a standard Goodyear Welt, and Lotus's own schematic, below, gives a good idea of how the boots were put together. The definition of a Veldtschoen is that the upper turns outwards, rather than inwards, as it's stitched on to the sole. On the Lotus construction, there is a welt underneath the turned-out upper. You can generally recognise a Veldtschoen pretty easily, by the absence of the visible welt, and the fact the leather, where the welt would generally be, is the same as that of the uppers. The boot on the bottom right seems to have been the first Lotus Veldtschoen design; it was joined by the more familiar Derby boot fairly soon afterwards, perhaps by the 1920s. 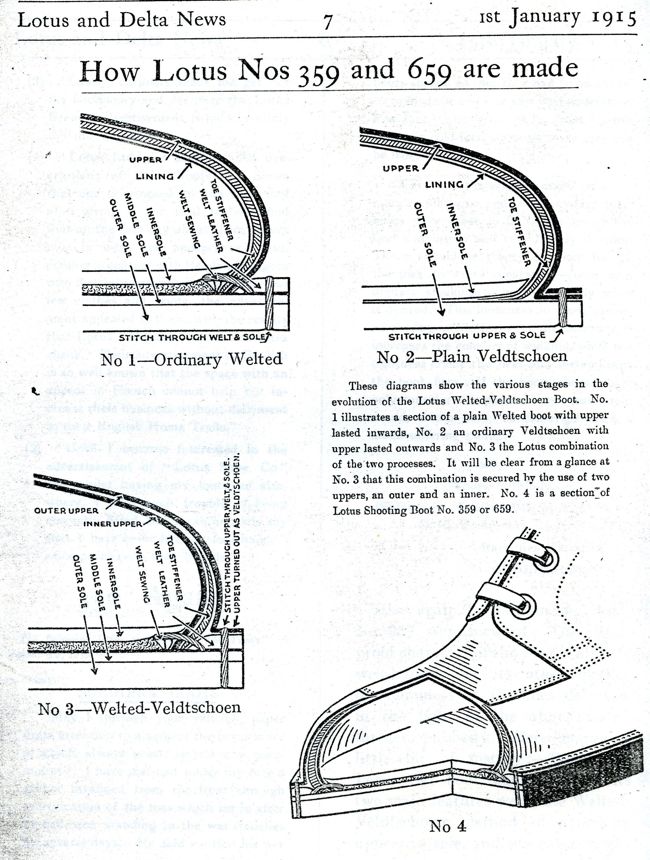 Over time, the popular Veldtschoen boot style seemed to become the Durham, shown here, from the 1962 price list; a Derby, with a 'fake" toe cap (two lines of stitching), and that distinctive horizontal stitching at the side. The shoe version is much the same configuration but has moustache-shaped stitching. As you can see, there is no seam that reaches the sole on the side of the boot, presumably to minimise water ingress; the boot features a bellows tongue, designed not to let water in, shown below.

Other manufacturers seem to follow much the same model for their own Veldtschoen, although some have a true toe cap, and differently-shaped stitching down the side. Nearly all Veldt boots seem to feature Zug grain - an especially waterpoof leather, with an applied pebble grain, produced by the Martins tannery, and then later Bridge Of Weir, I believe. 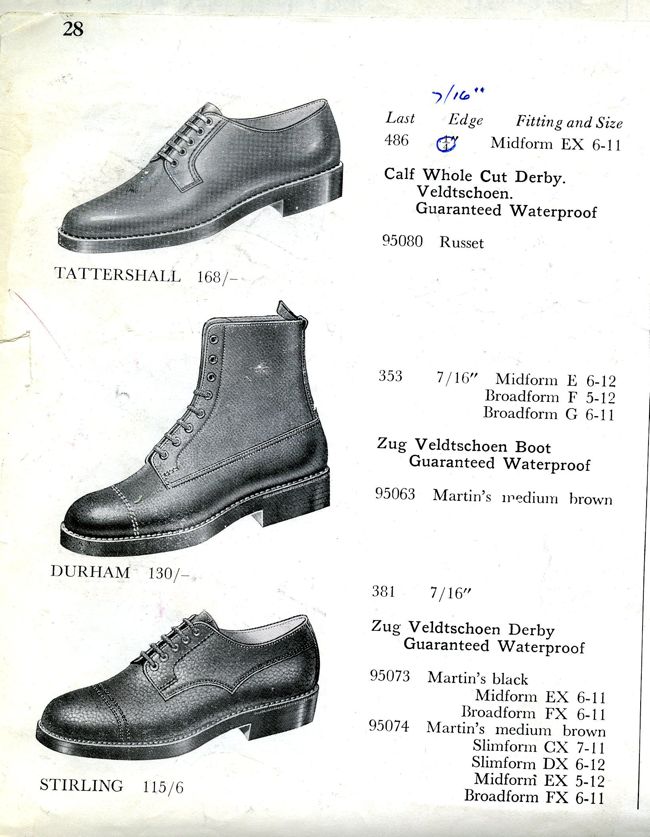 Lotus golf shoes, in the export catalogue, 1952. Again, you can see the Indy-style construction of the other variant, which is a similar shape to the very first boot. 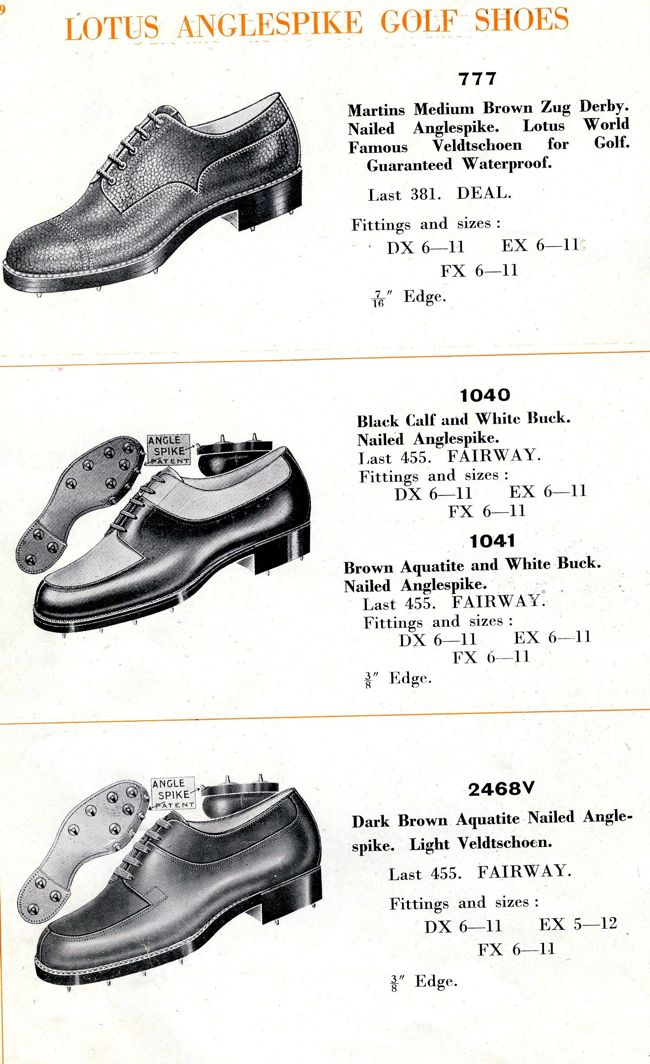 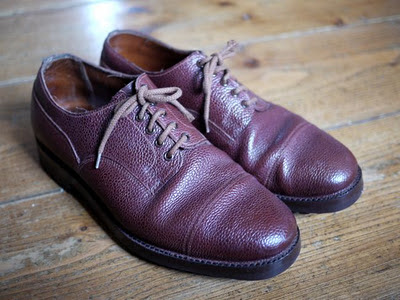 Here is my example of the Stirling Shoes. These were purportedly 1940s, although I reckon they're slightly later. Still totally waterproof, as are the boots at the top. I've had these resoled recently.

Toe caps, and the distinctive veldt look, on the Durham:

THese two zug styles, the Stirling and the Durham, were produced  essentially unchanged, from the 1920s right through to the 1980s. A friend of mine knows a serviceman from the 1950s with a pair of the Stirling Shoes, still perfectly buffed, which continued to be de rigueur for officers in the 1960s and beyond. There are a variety of other makers who produced similar styles, including Joseph Cheaney and Crocket and Jones. 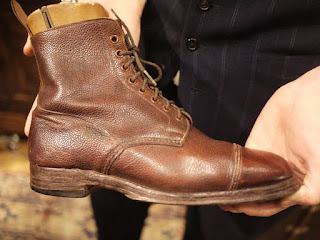 This is a nice pair of Veldtschoen Officer Boots I saw today in the RRL showroom on Mount Street, priced at £550. There's no maker's name, but these look similar to Crockett and Jones designs of the 1950s. Coincidentally, RRL have collaborated with C&J for Veldtschoen boots in the recent past, and even these newer boots seem to have acquired significant collectors' value, too.

Prices for Veldt footwear seem to have shot up recently; I aim to do a piece on available models later, but some of the best, affordable boots in this coniguration were the Alfred Sargent Selkirk and Kelso. These have gone out of production following the recent AS changes, although I know retailers are trying to organise a new run. As for Lotus themselves, the company continued to grow in the post World War II period; Lotus employed over 2,000 people in 1950, while the factory also supported many other local industries. There are factory shots here and here.

The company seemed to start losing its way after the last of its founding family, James Bostock, retired in 1970. Ownership changed hands several times - as cheaply-made, disposable footwear started to become  the norm. Most Lotus production was switched to Bridgend in Wales in 1996, and the factory was finally bulldozed in 1998. Deadstock pairs of Stirling Shoes do pop up, as before mentioned they were still in production in the 1980s, although in its final days Louts apparently survived by producing footwear for Marks and Spencer ( in the days when they proudly boasted of the British origins of most of their footwear and clothing). Nowadays, the Lotus name survives as a kind of zombie brand, applied to shoes made in India and elsewhere. Recentlly, I've seen supposedly deadstock brogues appearing on eBay and I suspect these, despite their British look, originated overseas.

Despite the demise of Lotus, there's still a reasonable supply of well-made, new British Veldtschoen and similar boots. You can still go hiking or camping and keep your feet dry. I'll cover these soonish, and will also update on good places to get your own Veldtschoen shoes and boots resoled.

Thanks to Ben L, and Rebecca Shawcross of  Northampton Museums and Art Gallery.
Posted by Paul T at 15:54