I mentioned I'd do a roundup of Veldtschoen boots available today. Here's a quick and dirty summary, which I'll update as I find more information. 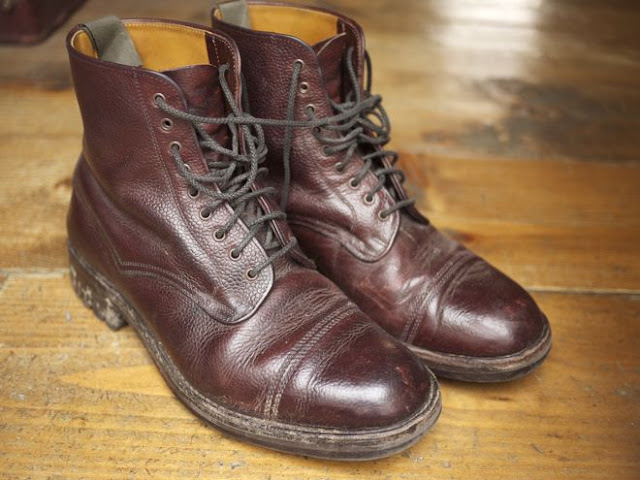 The boots that came in from the cold: Alfred Sargent Kelso, fresh from a tramp through the Medway snow.

These were the classic recent Veldtschoens - note the distinctive 'moustache' shape of the vamp, which doesn't extend to the sole. The Selkirk is the leather sole version. These were discontinued last year, but larger sizes are still available from Tredders and others, and have recently shot up in price to around £200-£250. A pair of Kelso are my Go-to boots, completely waterproof in the recent snow. I have heard there are plans to resuscitate this model: I'll update if and when this happens.

Again a true Veldtschoen. These cost £270 from RObinson Shoes. This Commando sole is common for military use, and is called the Itshide; sadly, Itshide have ceased production, although Corinium still produce a UK Commando equivalent. These are fine boots, although that's a Country Grain, not a Zug Grain, and most shops that previously sold Sargent seem to have switched.

Are these the same boots as the Cheaney? Look it. They don't state they're Veldtschoen, although my guess is that they are. Shipton And Henneage are an old brand, they've never made their own boots as far as I know, but I've seen S&H Veldtschoen from the 1950s. Not sure who makes these, but I've read that Sargent used to supply - but proved too unreliable. They cost £249 from Shipton & Henneage. Note that, like the Cheaneys, these have a different construction to the Selkirk, and the vamp reaches the sole, more like a normal boot. If you like the look of these, subscribe to the S&H mailing list, they regularly have 15% off sales.

Again, a true Veldtschoen. Around £250 retail. Made by Joseph Cheaney. Like the Cheaney, these are country grain I believe, not zug - a little smoother. Website is here.

Veldtschoen, Commando sole. I like the speed hooks, too; I believe the earlier version, without the speed hooks, is made by Alfred Sargent, while off-the-record reports indicate that this version is made by Cheaney. These seem to come in at the old Sargents price, under £200, from various retailers including SD Workwear; although they're reportedly not as nicely-made as the Sargent, that's a good price.

This comes from a retailer which is active on eBay. Made by Sanders, around £160. Link. Conventional storm welt, not a veldtschoen. They claim these use the same zug grain leathers as the Trickers, presumably from Horween. Note these have a different shape from both the Sargent and the Cheaney/S&H/Windermere.

Veldtschoen construction, but conventional waxed hide uppers. Again, you can see the military-influenced shape of the vamp, which has that 'moustache' shape like the Selkirks but sits higher on the boot. Lovely boots, which retail at around £385 from retailers like Pediwear

Tricker's have produced classic Veldtschoen in the past - there is a lovely pair in a showcase in their factory shops - see in the comments below for more information; it appears that in the past the Skipton was their Veldtschoen Zug boot, although they've also produced other variants for retailers. The Lyndhurst has much the same shape as the Grasmere, but it appears to be a Veldtschoen construction (the Grasmere has a conventional storm welt) with a full length bellows tongue. It appears similar to the Skipton, but for the latter's false toecap. The range is now discontinued - which makes the stock at Pediwear all the more attractive, at £285, with the old Tricker's quality. They appear to have Size 8 in stock - grab 'em while you can, and remove the temptation, please.

This is an older Tricker's model, with some of the familiar look; at first I was told they were available Special Order, but it now appears they're too busy with standard construction to mess around with Veldtschoen. Grrr.

Not a Veldtschoen, but a beautiful zug boot. Like many of the Bureau specials, these are pretty keenly priced at £320. The Bureau
Posted by Paul T at 04:00