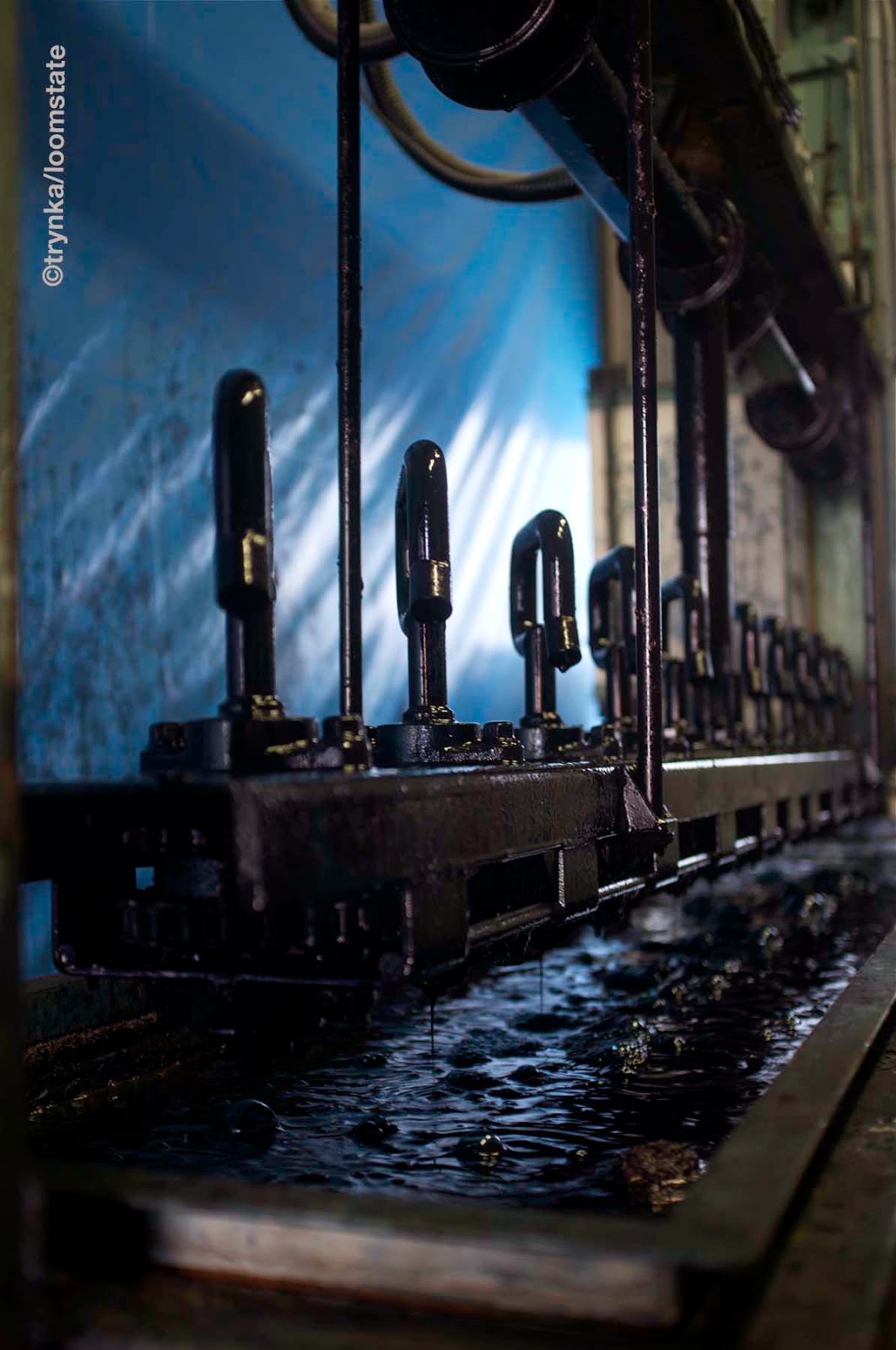 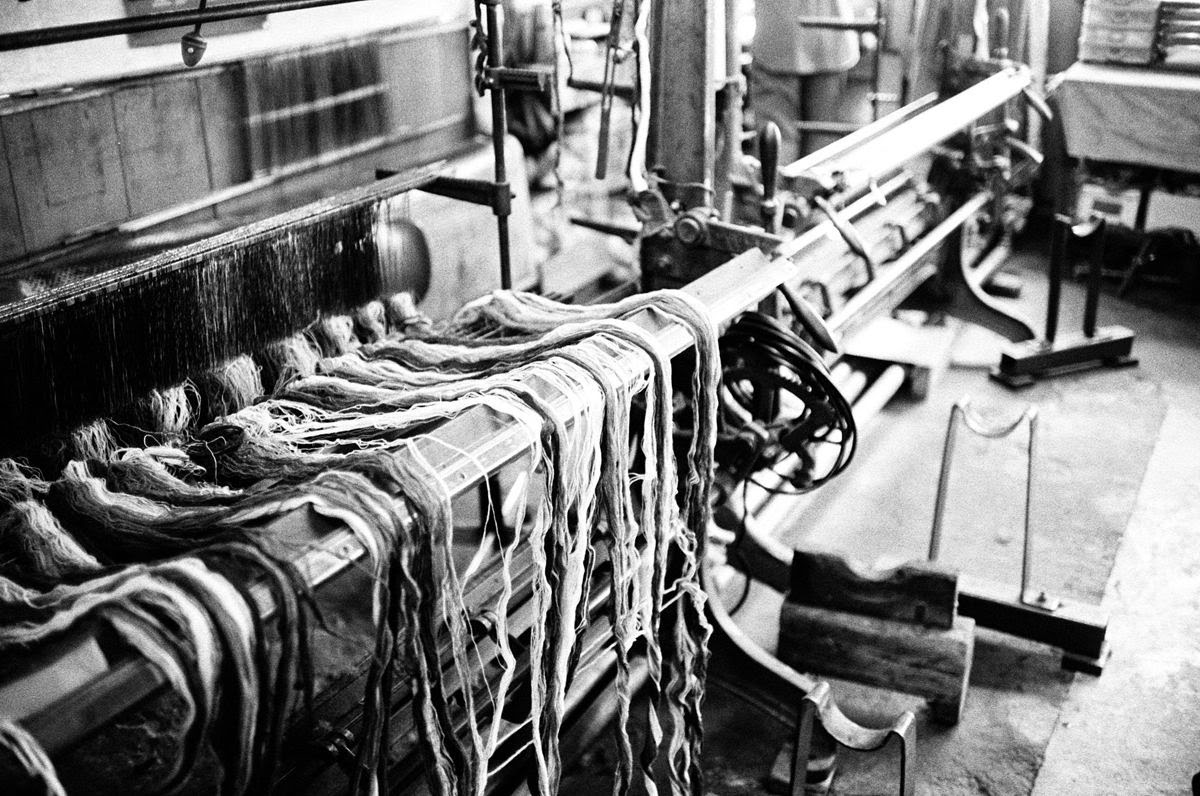 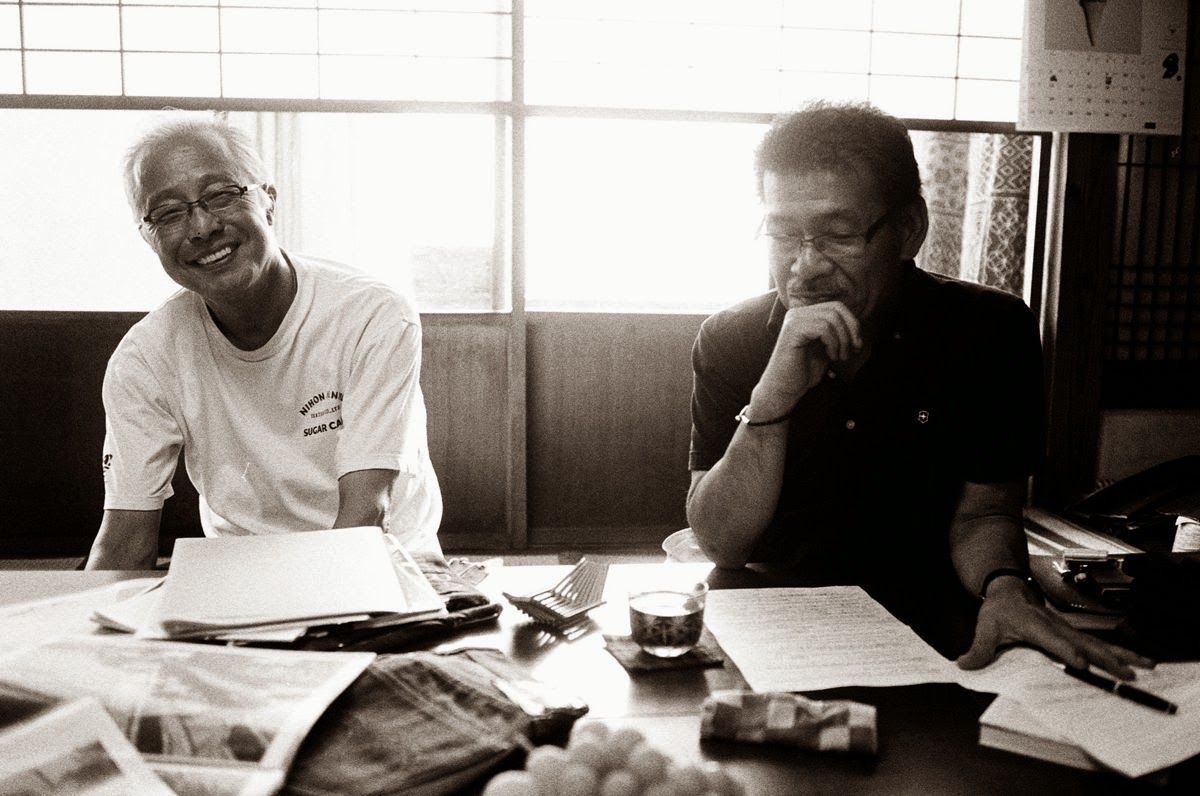 The story of Japanese denim is filled with magic and mystery. Many people know the story of the Osaka Five, the brands who spearheaded the revival of premium selvage denim in the 1990s. In comparison, the story of the mills who actually produced that denim is shrouded in mystery. Of all those mills, Nihon Menpu tends to inspire the greatest reverence among denim cognoscenti. When you've admired that kooky Mr Freedom wabash, the beautiful streaky Sugar Cane Edo Ai, the deep natural indigo of SDA's 103XX, or the authentic evocation of '70s Levi's produced by Denime, you've actually been looking at the work of this venerable mill in the heart of Okayama.

Okayama is a beguiling, rural location; the nearest town, Kurashiki, is famous as the centre of Japan's textile production, with many beautiful, low, wooden houses dating from the historic Edo period. Several famous mills – including Kurabo and Kuroki – sprung up around here, while the nearby island of Shuikoki is a last centre of natural indigo production. Nihon Menpu itself was established in 1917 by Jiroichi Kawai, around 20 miles out of Kurashiki. Reached by a rural train line winding alongside the Oda River, the factory nestles just out of sight of the Sanyo Highway. The workmanlike exterior belies a magical place, now overseen by Shinji Kawai.

Shinji-san is tall, grey-haired, somewhat refined, yet engaging and practical; he's worked with the family firm from 1980, and took over as president in 1996. Towards the end of a sweltering afternoon, we take tea in the upstairs boardroom, under the watchful eyes of photos of his Kawai forebears and the company's longest-serving workers. Together we study 1920s American denim pullovers, or other scraps which Shinji-san and his yarn experts have deconstructed and analysed. Yet the soul of Nihon Menpu comes from its distinctly Japanese heritage. The factory has made indigo-dyed fabric for most of the near-century it's existed; the room is filled with vintage fabrics loomed here: cotton ginghams, patterned Bingo Kaguri kimono fabrics and various Sashiko, the heavy, working kimono jacket.

This heritage explains why Nihon Menpu was one of the first Japanese mills to produce denim. Early investigations into the fabric derived from the Kawais' close relationships with Edwin, who started making jeans around 1961, and, from 1971, Studio D'Artisan (NM made their selvage denim from 1988). SDA's Shigeru Tagaki was an early collaborator with Mr Kawai and, he says “a very important person in the history of denim – he was a big influence.” Other crucial people in the complex web of Nihon Menpu's relationships include Mr Kondo, from the Taishobo Spinning Company, who make many of the yarns, and Mr Ryoichi Kobayashi of Toyo/Sugar Cane.

Although compact, Nihon Menpu is crammed with fascinating machinery; doubtless, the two key processes that define its finest fabrics are the 1920s Toyoda G10 Shuttle looms, and the indigo dyeing vat.

Toyoda looms are a key part of Japan's industrial heritage, and are the workhorses of Japan's revival of selvage denim (the story that the Osaka 5 used American looms is a persistent, but silly myth). Most of Japan's selvage denim is made on Toyoda looms dating from the 1950s or 60s. Nihon Menpu have over 70 of these looms, pictured here. They're historic items, but more historic still are the 20 Model G from the 1920s, the loom that helped launch Toyoda (later Toyota) as an industrial giant. Proud as he is of these machines, Mr Kawai doesn't allow photos; I believe they were customised, different from others I've seen. These produce the finest denim – the machines weave more slowly than the later Toyodas, hence the fabric is “very relaxed”. With low internal tensions, it's softer and smoother - the epitome of what the Japanese call “gentle weaving.”

Although Kawai-San wanted his own G10 looms to bask in romantic anonymity, I have found an almost identical model rather closer to home, and I'll post the photos here soon.

The elderly hank-dyeing apparatus, controlled by Koji Nomiya, represents the same, slow-food philosophy. The hanks, short loops of yarn, are twisted by the machinery and repeatedly dipped in the vat; and the vat's contents are, again, unique, for Nihon Menpu are champions of the Ai method. This ancient technique uses “Sukumo” - the composted leaves of the Japanese Polygonum Tinctorum plant, grown nearby on Shikoku Island – Kawai-san has visited the island many times, harvested the indigo leaves and studied under Dr Osamu Ni, one of the leading experts and researchers in this ancient art. Often, this Edo Ai method is combined with dyeing via natural indigo cake, from Indigofera Tinctorum, a more efficient, but still, unthinkably old-fashioned technique. Hence there are some Nihon Menpu denims, like the Edo Ai, made for Sugar Cane, which feature a combination of dyeing techniques from the 16th, 18th and 20th centuries.

I knew Nihon Menpu produced many fine denims, principally for Sugar Cane and Mr Freedom, but I was surprised to discover that several other of my favourite fabrics originate from this tiny mill. There is, however, no typical Nihon Menpu denim. The Edo Ai, with its flamed indigo effect and slubby yarns (which contain tiny sugar grains at their core, to soften the fabric) is extrovert, obviously different - most of us will know if from several beautiful Flagship Mr Freedom items. Others, are extremely subtle. Over the last couple of years, I've been wearing a 2 by 1 Buzz Rickson armourers top; it's plain, with a utilitarian beauty all of its own, and the fabric comes from Nihon Menpu. Another landmark fabric is that made for Denime; I'm not sure how many models, but NM seem to be responsible for their late '60s or '70s style fabrics – one of Mr Kawai's own favourite jeans, shown in the photo. Over the last half dozen years, I've found my Studio D'Artisan SDA 103XX to have some of the most intriguing denim; it's natural indigo, which is dark and black when new, then fades to a baby blue with absolutely minimal crocking and a far more subtle slub than most Japanese 40s and 50s interpretations. Again, this unique denim is a flagship Nihon Menpu design; I believe in this case, the dye used is Indian natural indigo cake, rather than the Sukumo method. Finally, to give an idea of the breadth of their denims, I believe NM also produce the distinctive dark chambray for LVCs lovely sunset two pocket shirt.

My head was reeling after the day I spent looking around the factory, a combination of information overflow, and of course disorientation; technical terms don't always translate from one language to another, which left intriguing mysteries. But even that one day helped dispel many myths and unlock many secrets. It is really a magical place.

Thanks to Mens' Style magazine, who commissioned my original story on Nihon Menpu. 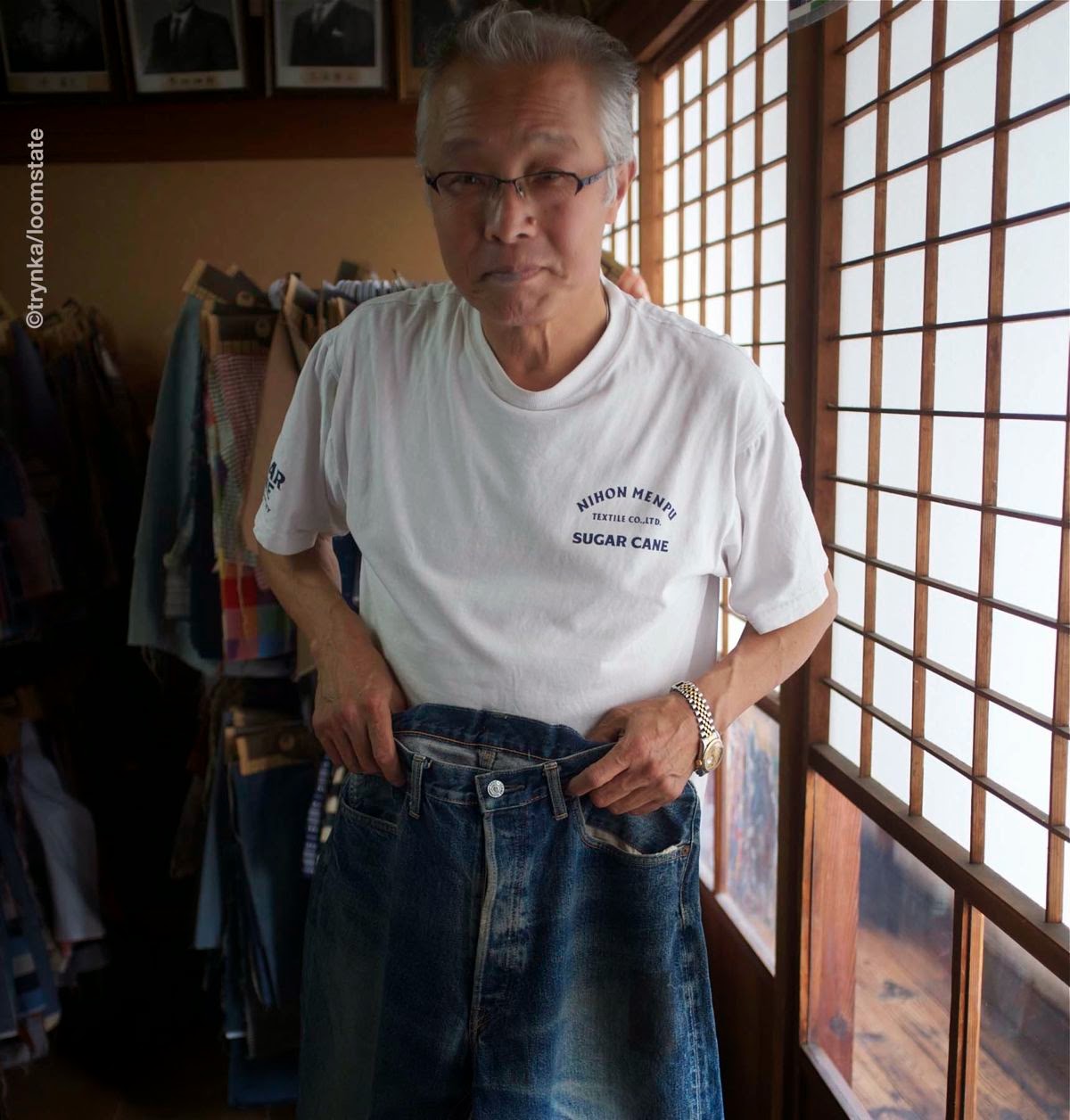 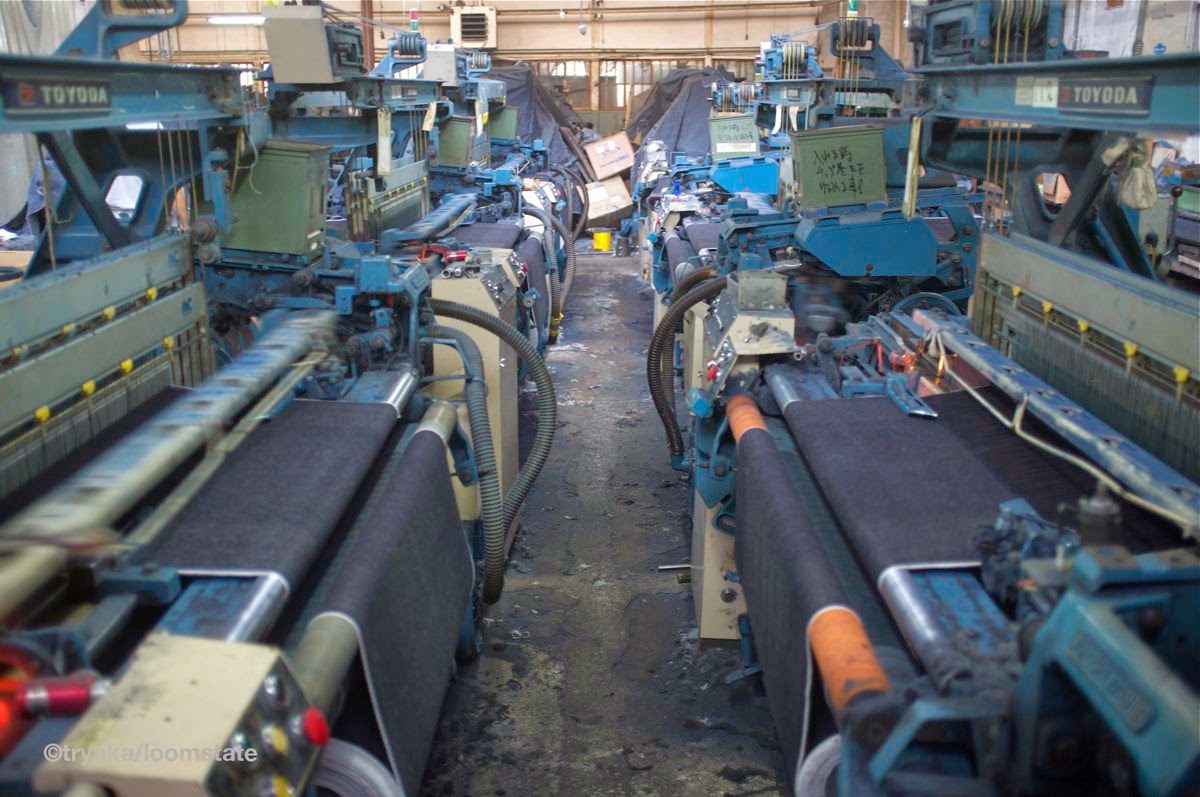 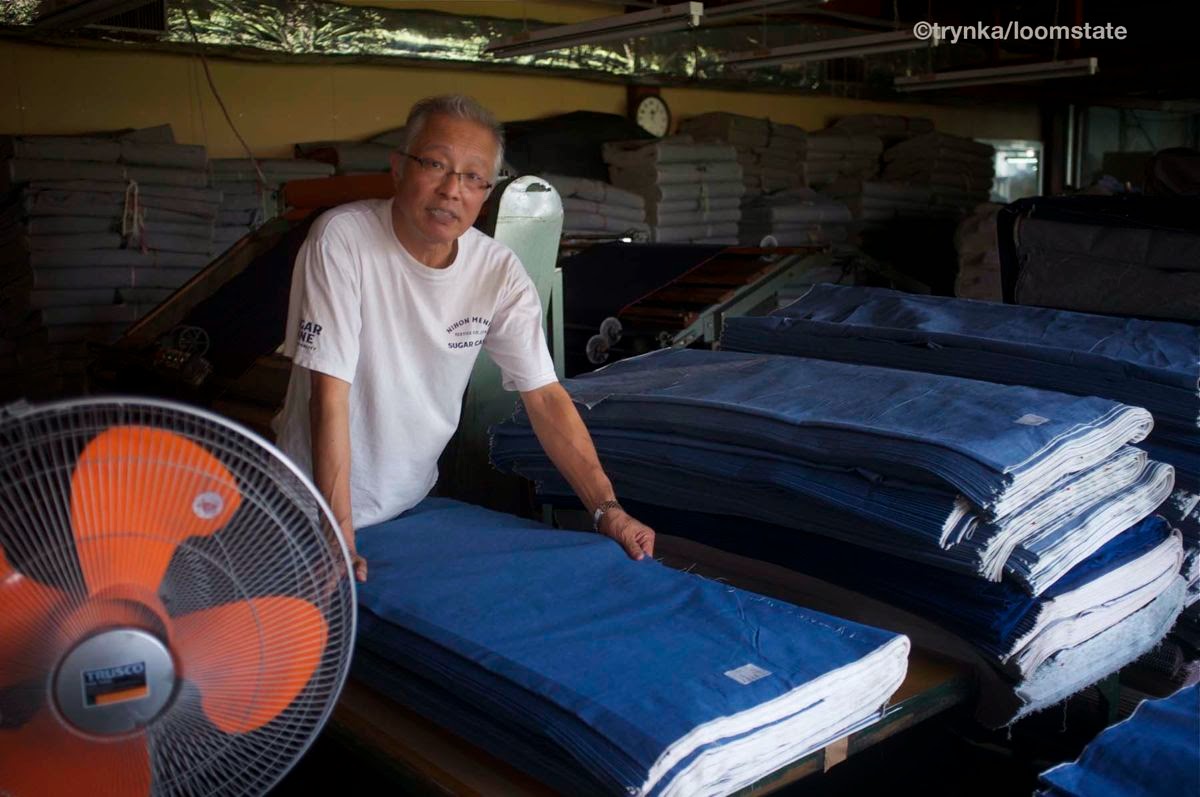 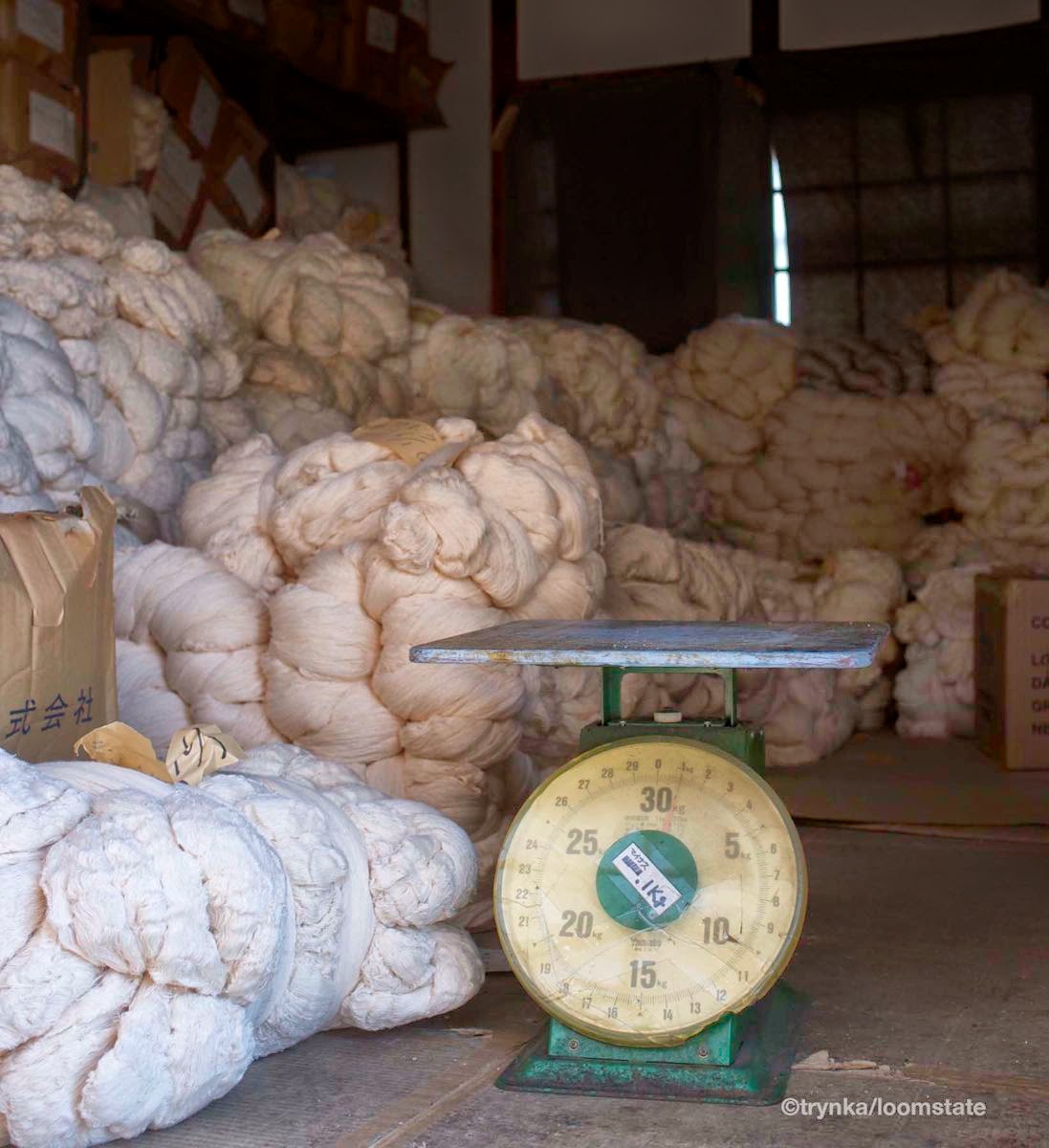 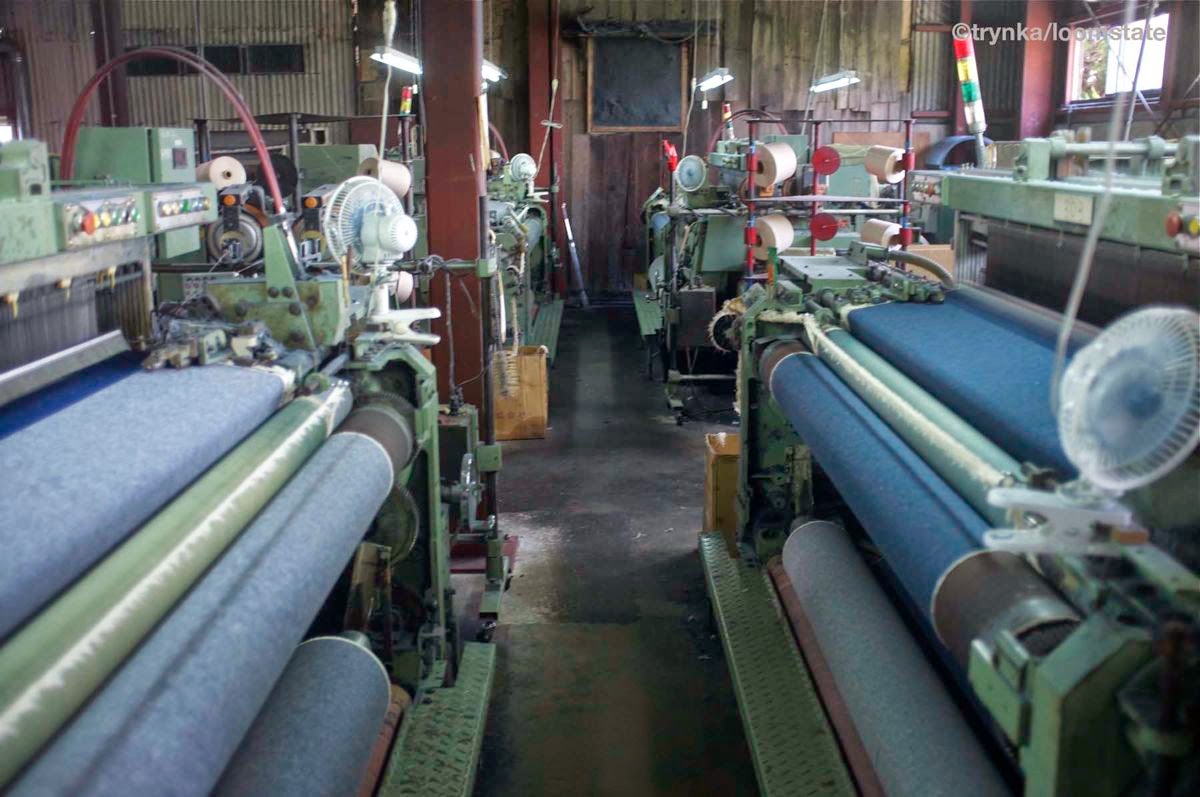 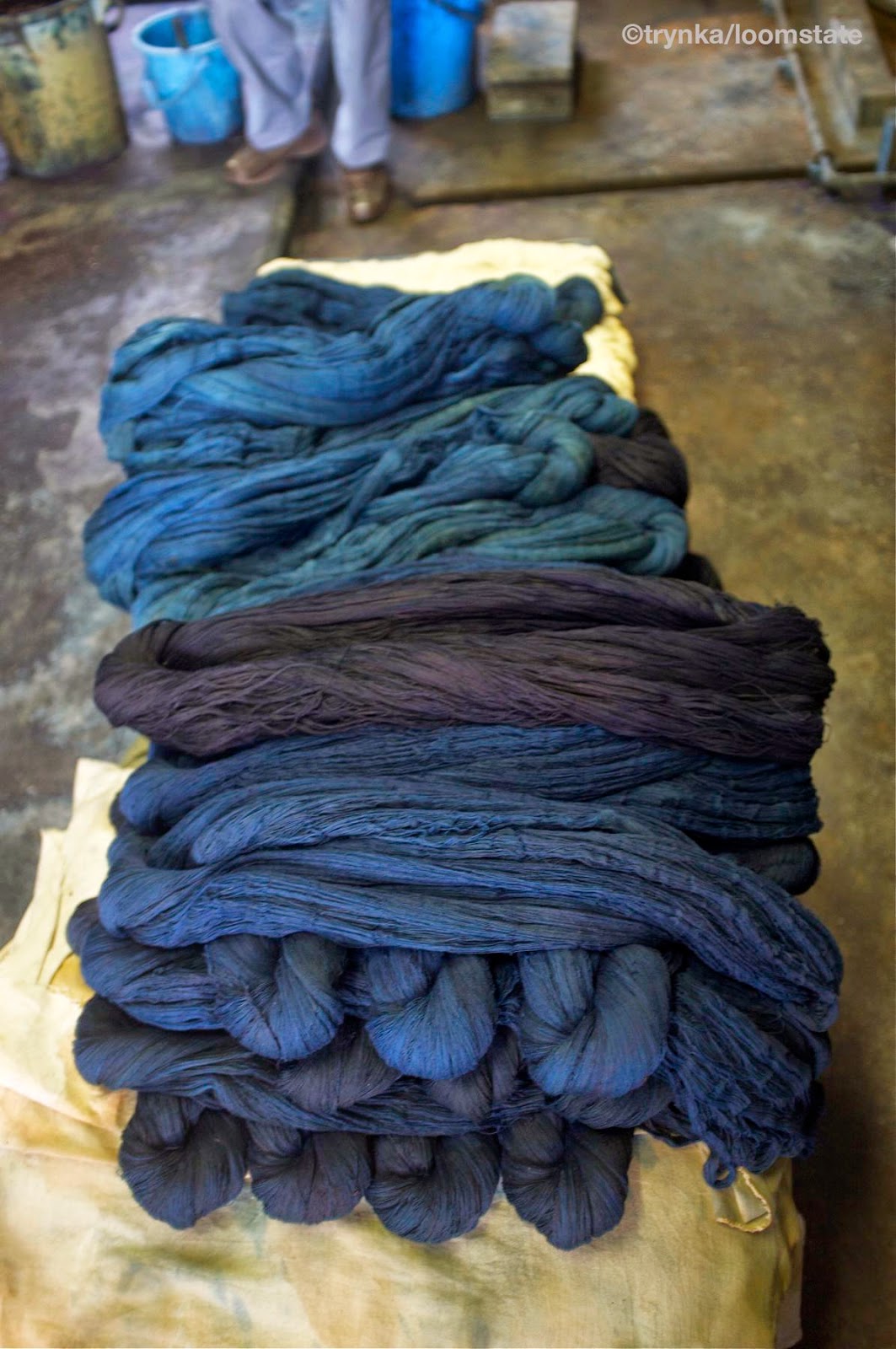 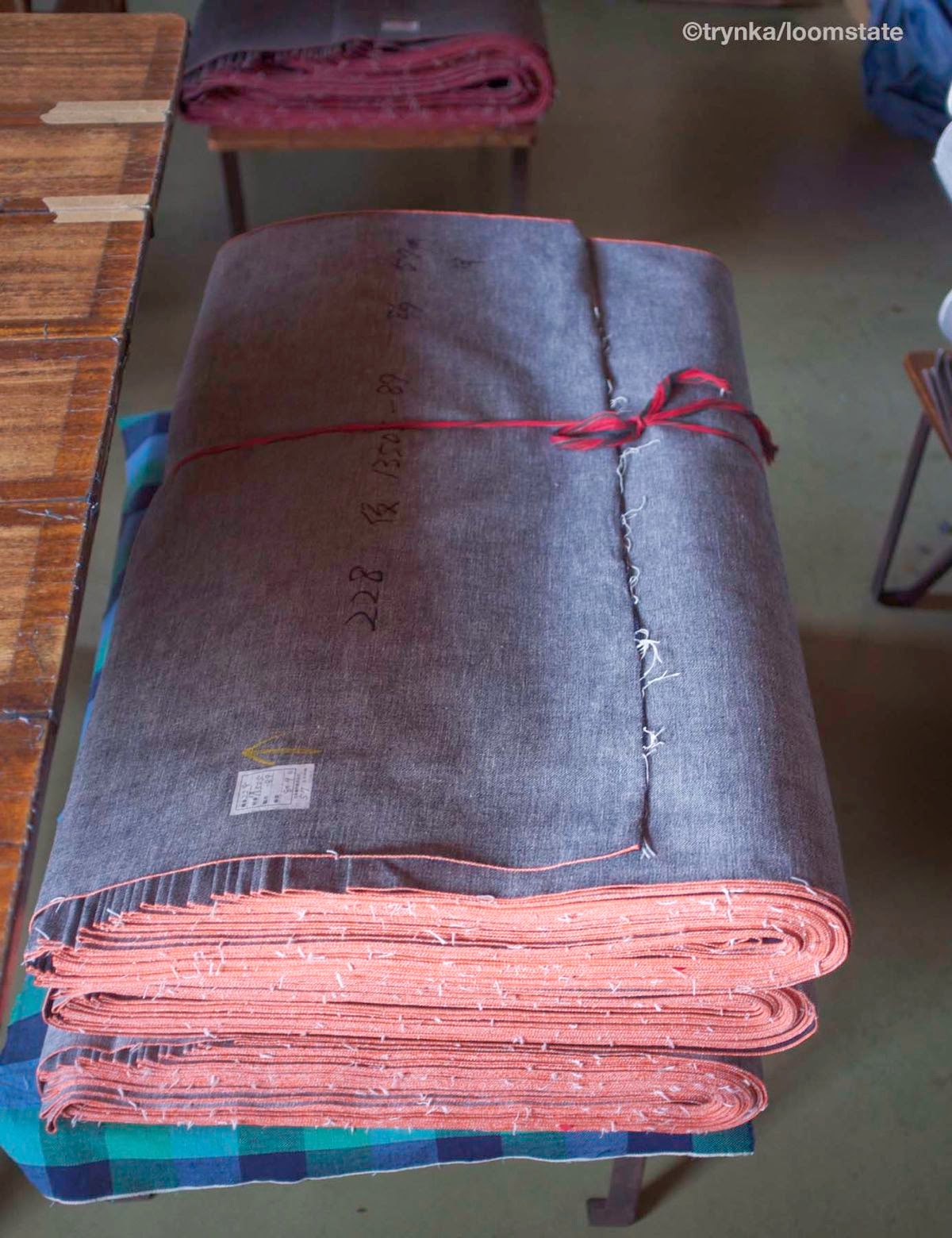 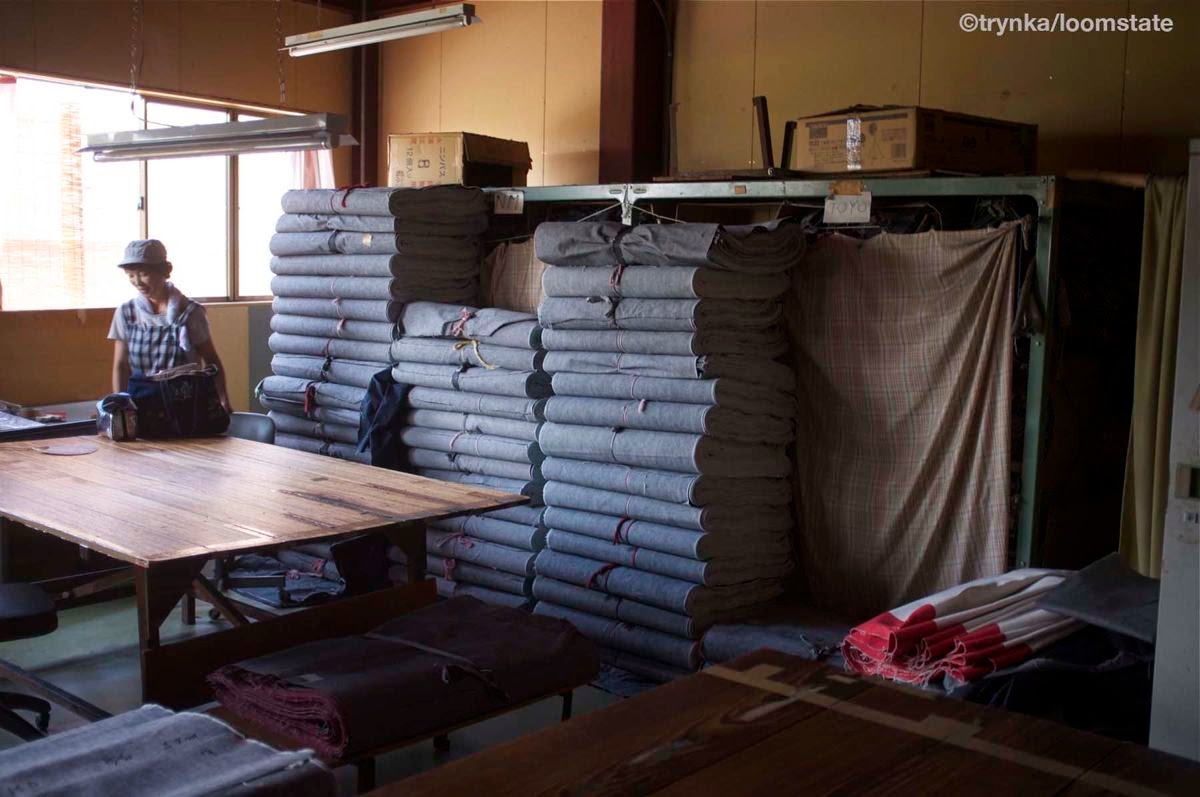 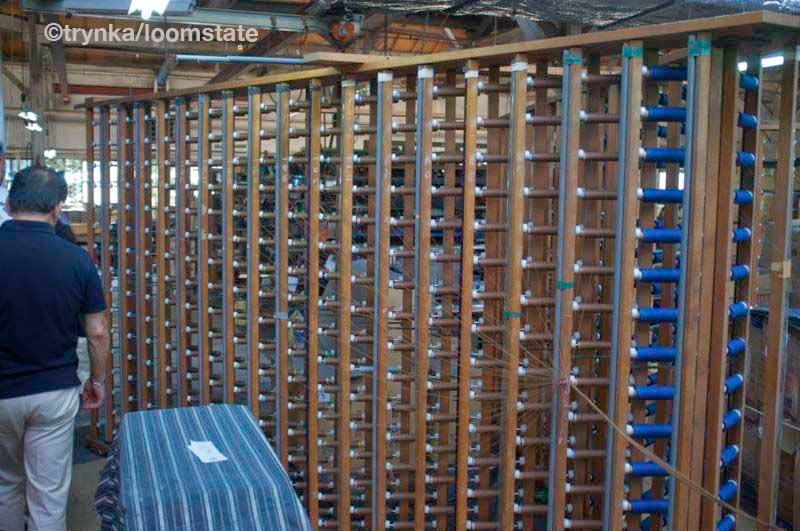 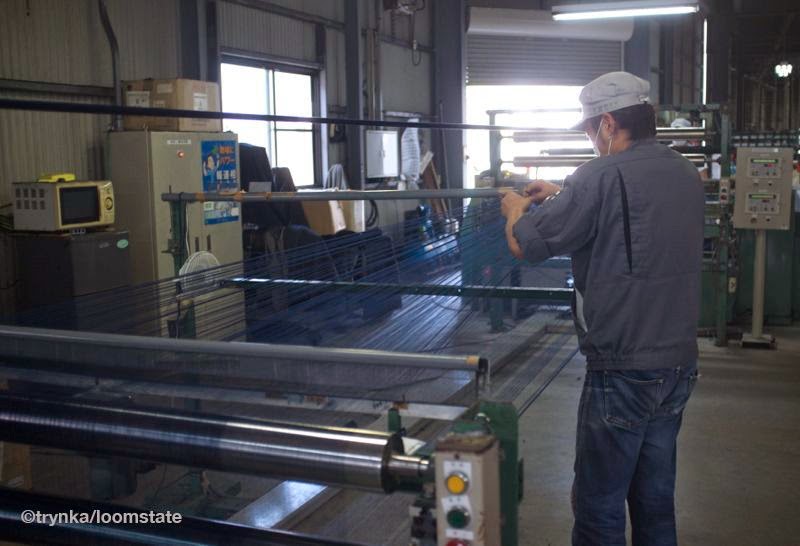