If it quacks, is it canvas? 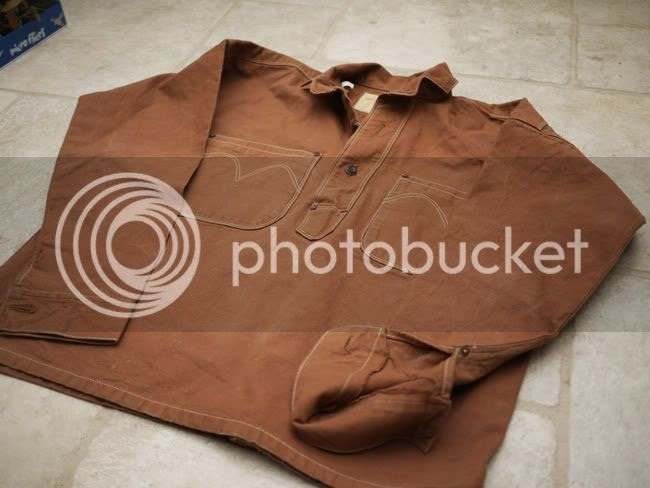 Duck is denim's obscure older brother. When Jacob Davis first had the idea of riveting workpants, his first production run was not in denim – it was in white duck. Then when Jacob teamed up with Levi Strauss, the first work overalls – probably made by home-workers, earning a piece-rate – came in either cotton duck, or denim. Pretty soon it turned out that the first Levi's-wearers preferred denim due to how it wore in, but cotton duck was an integral part of Levi's product line for at least 20 years.


Today, thanks to people like Rising Sun, Ooe-Yofokuten, Left Field and Carhartt, cotton duck is back in fashion. Yet the origins of the fabric are still less understood than denim. For instance, are duck and canvas the same fabric? In some accounts, it was said that Levi's or Jacob Davis used canvas for their first pants because it was available in large quantities for use as sailcloth or tent-cloth. A decade ago, I was told by Levi's researchers that this story was incorrect and that they used duck, a different fabric.

Now, thanks to the work of fabrics guru Ralph Tharpe, it turns out it could well be true. Just over a year ago Ralph told me how LVC had ordered some duck for their new repros, and specified an unusual selvage – with a wide gap between the edge of the fabric and the black selvage line. This gives a distinctive look to early Levi's duck pants, where the selvage line is visible on the leg, outside the busted seam. Ralph started looking for information on this distinctive selvage: “I was doing research, in the Callaway Textile Dictionary and elsewhere, looking up the particular weaves and it referred me to sailcloths. I looked at the sail cloth definition and it said, in the UK the stuff was 24 inches wide, in the US 22 inches wide, and then they were 10 oz per linear yard - and it said there was a line in the fabric that was the guide for sewing the pieces together when making sails. The further the line is from the edge, the heavier the product. So without any question, things made from cotton duck with the line further away are Sail Fabrics!It is beautiful! I want to do more research on sailcloth, the dyeing et cetera. But can you imagine, in San Francisco in the 1870s, how there would be tons and tons of sailcloth around?”

The suggestion that the black line in duck selvage is a guide for sewing sails is indeed a beautiful one. So I sent Ralph a bunch more questions about the origins of cotton duck, and here is his reply.(Incidentally, I didn't ask if he saw canvas and duck as being the same, as Bud Strickland answered that question in the affirmative a couple weeks ago.) There's lots of new information here: note also, Ralph's point that weights for earlier fabrics were based on linear yards, and that some of them were probably heavier than we'd think.

How duck got its name
Early flax sail cloth from England or Scotland came with 2 trade marks.  The raven mark was stenciled on the lighter fabrics, while the heavier ones bore the trademark picturing a duck.  This is according to Fairchild's Dictionary of Textiles.  Wikipedia says "cotton duck" is from the Dutch word "doek" meaning, linen canvas.  Probably there is some truth to both references.  Later the name "duck" was associated with heavy cotton fabrics in the USA.  Usually the word canvas and duck are used interchangeably.   However, there are many different end uses for "duck" from tents to fire hoses.  The fabrics come in a variety of different weights and yarn constructions.  Many have plied yarns in the construction and/or two singles yarns weaving side by side.

Why that unusual selvage line?
The selvage line on some ducks, according to the textile dictionaries I am using, serves as a guide to the sewer when joining the narrow widths together to make sails, covered wagon covers, or tents.  The farther this colored thread is from the edge of the fabric, the heavier the duck.  In the pant examples from "late 1800s" that Mike Harris has sent me, the line is exposed on the outside of the pant near the "busted" out seam.  I did a punch weight on one of the garment fragments (brand is not known) and it weighed 14 oz.  Of course this is the washed weight and based on square yard ounce weight.  The sold weights at the time sometimes appeared in the catalogues or on the garments tags.  These weights were based on the weight of a linear yard of narrow fabric.  They are NOT square yard weights as we use the term today.   Eight, nine, and ten ounce weights were commonly quoted on the tags and in the catalogues, but the actual square yard and fully shrunk weights were much heavier.

What's the typical weave for a duck or canvas?
OK, so you asked about the weave.  In general, duck and canvas weaves are based on the plain weave.  They don't have a twill line.  The weave is balanced so there is no leg twist common in vintage jeans.  The fragment mentioned above has two warp yarns weaving together and two weft yarns weaving together, which technically makes a basket weave.  Most often when someone says "duck" I generally think of two ends of warp weaving side by side with one weft yarn across.  But the basket weave one is also technically a "duck".  Among the fragments Mike has sent to me one can find only two ends weaving side by side in warp, but weft can be one yarn or two in the same shed.

Was that duck originally destined for sails?
Based on the fact the selvage line is so far from the edge and the line is showing on the outside of the pant leg, can we assume that the fabric was not originally made for pants?  Did the "lap seam" line later become designed into the pant?  Or did they eliminate it at some point?  I would  dearly love to know.  I am also curious about the color of the fabrics used for sails and tents, etc.   However, based on the distance the selvage line is off the edge, it seems safe to assume that the early duck pants were made of fabric that were either dual purpose or not originally intended for pants.
Special thanks to Ralph Tharpe for sharing his insights. 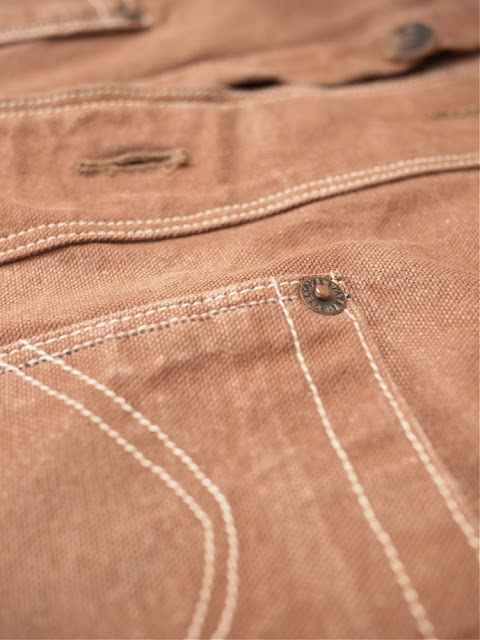 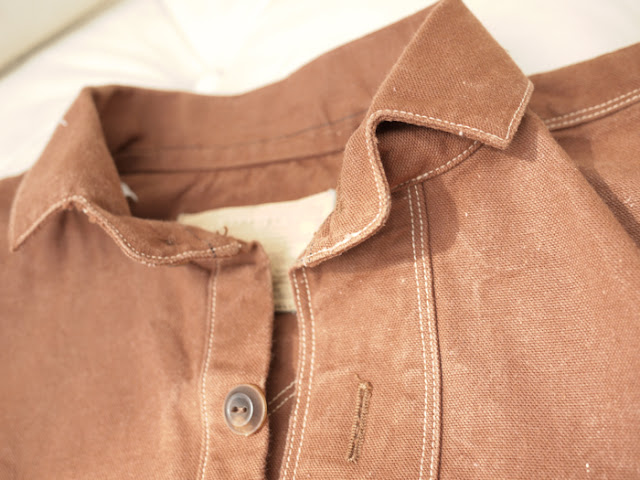 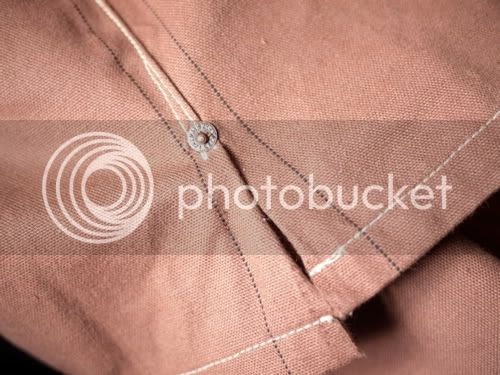 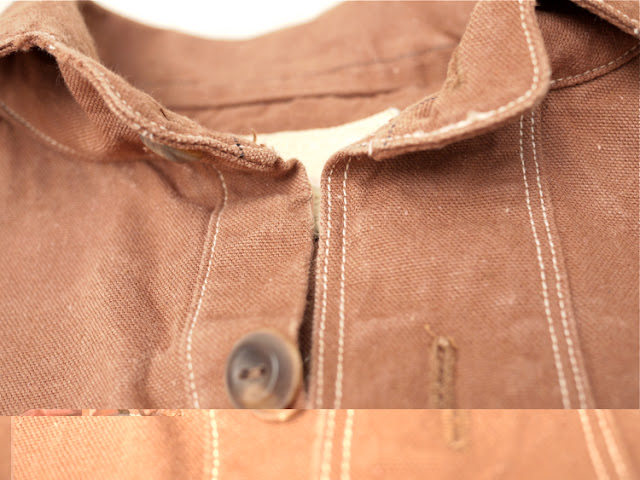 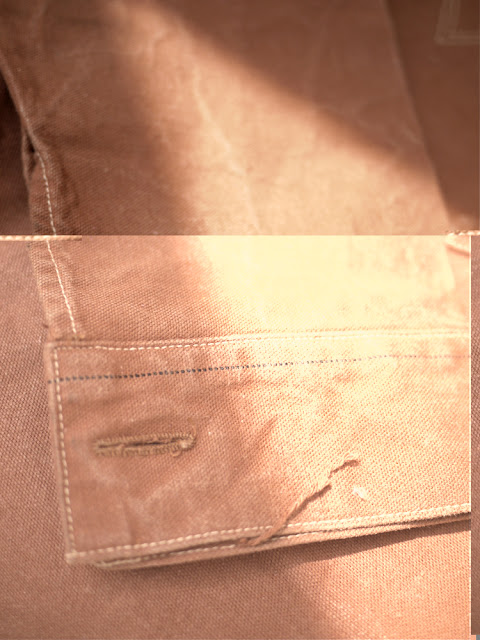 This 1890s duck jumper repro, like the original, and other early duck items, is festooned with black selvage lines. We believe these betray the fabric's origins as sailcloth.
Posted by Paul T at 06:13