Make mine a triple: the Levi's 1874 Triple Pleat Blouse 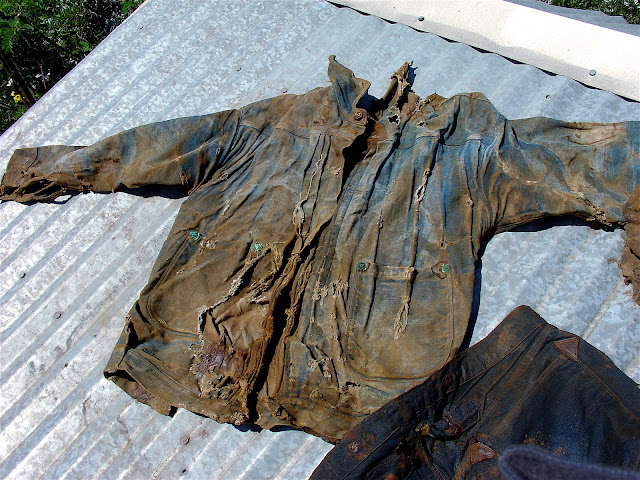 The Levi's 1874 Triple Pleat Blouse, as found by Michael Harris.


Denim, that venerable, hip fabric, has a way of throwing up the most contradictory resonances. It's a fact I can remember hitting me, almost forcefully, when I happened to be at Levi's San Francisco HQ the day that the venerable Nevada jeans – the ur-Levi's – were being shown for the first time to the company's employees. This antique, Victorian-era clothing, with its distinctive fading and age-worn rips, looked hip. You could have walked onto the street wearing them.

LVC's 'new' Three Pleat jacket embodies the same contradictions: beautifully simple, and given the current profusion of workmanlike, Edwardian-influenced clothing coming from Nigel Cabourn, Heritage Research, Ralph Lauren and others, it looks distinctly contemporary. But it came to us via a 140 year old rubbish dump.

We can thank writer and researcher Mike Harris, who's completely rewritten the history of early denim and workwear in his book Jeans Of The Old West, for discovering what is almost certainly the most ancient example of a Levi's jacket found to date. It was found in an undisclosed location on Nevada, “In a a trash pile that we had been working for the last four or five years. We had walked away from [the pile] a few times, it was so frustrating; you might find pockets of things that were thrown away, then go for another five trips and find nothing. It took years to realise you need to bounce around in this pile.”

“Then in 2008, we went to the top of this pile – which is massive, on a hillside, about 100 feet tall and 200 feet wide, you can see where we've been digging for years. My mom's husband was with me and said, Where shall I dig; he started digging down and got a layer of gunny sacks, burlap bags. I was 10 feet away watching him. Then he walked away to a different spot. I jumped up, went over there, and under the gunny sacks I saw denim. Then I saw duck. You can tell, by the level, and the way it's laying, whether it's a whole piece of denim or cut up. And I could see there were at least two pieces that were going to be whole. So I took the gunny sacks off the thing, and carefully pulled it out: the Triple Pleat jacket was there, the Greenbaum pants and the Greenbaum 2-pocket duck jacket that are in the book.” 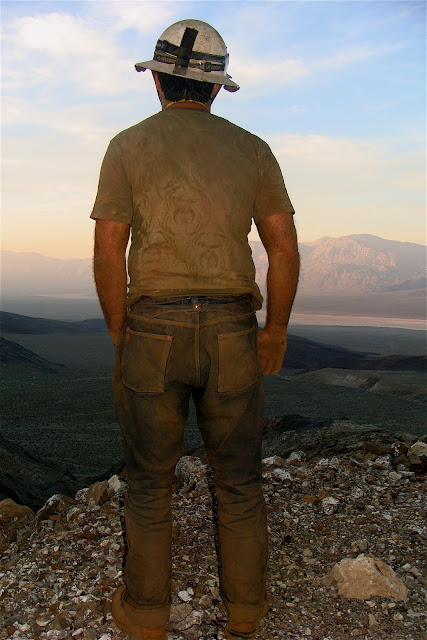 This venerable trio is one of Mike's many significant finds , which have shed a huge amount of light on the history of early workwear; I hope to detail these at a later date. The three-pleat jacket, alone, approaches the Nevada jeans in importance. The Triple Pleat, with the characteristic pleating, box stitches, and round-bottom pocket without arcuates, is itself very different to any known early Levi's jackets. Michael Harris believes this little stash of items were thrown away in December 1876; hence the triple pleat “could easily be from 1876, 1875 or 1874” - which is, of course, very near to May 1873, the date of Levi Strauss and Jacob Davis's patent for riveted clothing.

The Indiana Jones of denim: Michael Harris, who has revolutionised our understanding of early denim. He also wears a mean pair of Roy x Cone.

Miles Johnson, head of design at LVC, has been responsible for many intriguing Levi's recreations, including my personal faves, the cotton duck Closed Front Jumper and 1878 Pantaloons. He got to see a photo of the jacket soon after its discovery: “we could see how beautiful it was. It was a great surprise – a really exciting find.”
On investigation, it turned out that there was an artist's rendering of the same jacket in the archives – the jacket was in a catalog listing from 1874. Finally, when the jacket was acquired by the Levi's archives, Miles got to examine the real thing, alongside his pattern maker, who recorded every element of the cut, stitch lengths and other details. The jacket abounded in beautiful details, says Miles: “The leather patch is not positioned centre back as you'd expect – that was really nice.The fit is a gem and doesn't need to be adjusted in any way whatsoever. And, from memory, the construction generally was incredibly simplified.The waistband has a little bit of tilt, if I remember right, shorter in back than in the front. It's one of those jackets that really fits. If you look back, you'll see these described as a blouse – it's something in a jacket weight fabric that's made to fit like a shirt. That's a nice feature. Also I love the sew-on buttons, with incredibly thick, chunky thread.”

The final feature is, of course, those round-bottom pockets, similar to those of the Duck Closed Front Jumper, with the wide top hem characteristic of very early Levi's, but no arcuates (although artwork in the Levi's archives implies the arcuates were featured on later versions). It's more than likely that this early jacket was sewn by a home-worker, like many early Levi's items. If so, they knew what they were doing: “that pocket shape is more work on the back and requires more skill [than square pockets] – it would have been helpful that the fabric is 9 ounce, anything over 10 would have been difficult.” As for the distinctive detail of the triple pleats, the original inspiration could have come from many sources, but one possibility is the aversion to waste: “we weren't wasting fabric then – so we would have folded it in, rather than cutting it off and throwing it away.”

Some details of the reissue can only evoke, rather than replicate the original; for instance, it's not certain what writing would have been on the original, pre-2 horse brand patch. The shape of the sew-on buttons was replicated, but Levi's are not allowed to use nickel plating in their new hardware! The reissue uses poly cotton in place of the original linen thread - “which is a frustration, but linen is impossible to work with” - while the 9oz denim is made by Kurabo, designed to get as close as possible to the early Levi's fabric, much, but not necessarily all of which, came from the Amoskeag factory in New Hampshire. (This particular Kurabo fabric uses synthetic indigo, but given the multitude of other variables, it probably gives a better approximation than that natural indigo Kurabo LVC has used occasionally in the past). The short stitch length and style of stitching is one of the most characteristic, distinctive aspects of early workwear, and it looks beautiful on this jacket. I was pleased to see the correct, chunky, flat-top rivets  – they're very evocative of early Levi's  (and now, thanks to Mike Harris, we know there are two versions, with different size type). 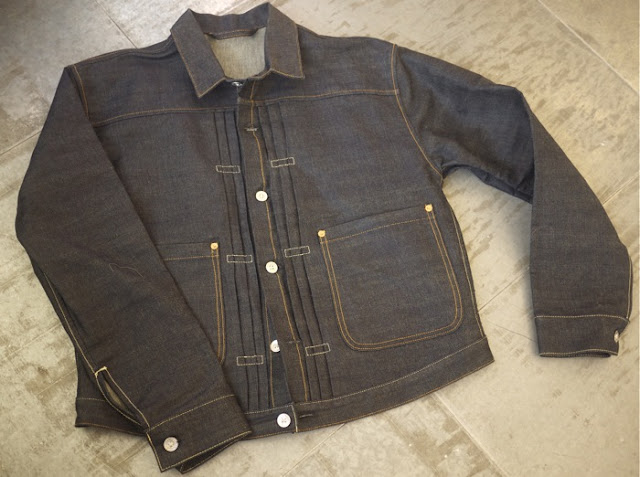 Of course, we know that early Levi's workwear was sold at a premium, compared to the company's now-forgotten rivals, and this reissue, at €350, perpetuates that! Yet there are only 120 of the raw version being produced, and we have seen the best LVC replicas, notably the first, limited edition Nevada replica, have actually fetched more than the original retail on eBay. It's a magical piece of clothing and it's great to see LVC produce such unique, esoteric items. I shall be saving my pennies, in hope of a version in cotton duck. 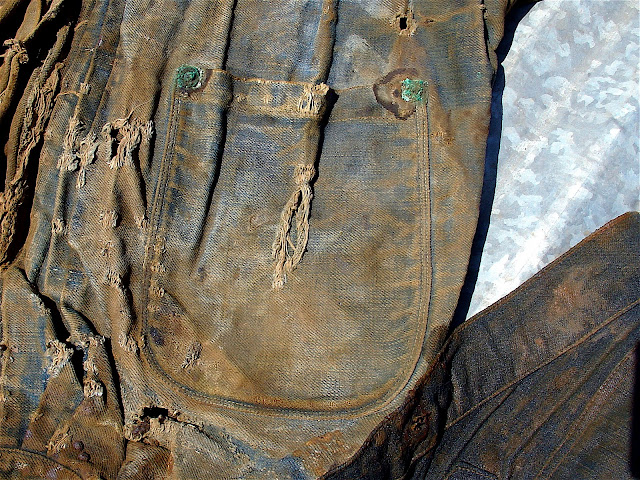 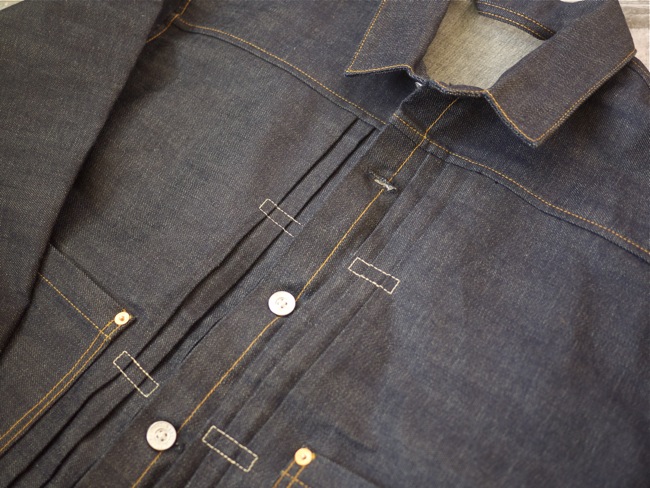